Theme: The scope, reach, and impact of Military Geoscience

The theme of the conference was “The scope, reach and impact of Military Geosciences”. With this deliberately broad theme the organisers aimed to host a conference celebrating the diversity of research avenues explored by Military Geoscientists, as well as the impact this research has on military activities in the broadest possible sense.

The 12th International Conference on Military Geosciences was held at the Stellenbosch Institute for Advanced Study (STIAS) from 18 to 23 June 2017. The conference was followed by a Battlefield tour to Kwa-Zulu Natal from 24 to 30 June 2017.

Forty Eight delegates from Angola, Austria, Canada, Croatia, France, Germany, Israel, Italy, Nigeria, United Kingdom, United States and South Africa attended the 12th International Conference on Military Geosciences. It was the first time in the 24 years history of the conference that it was presented outside of Europe or North America. The theme of the conference was ‘The scope, reach and impact of Military Geosciences’, and it celebrated the diversity of military geospatial issues investigated by members of the Association. 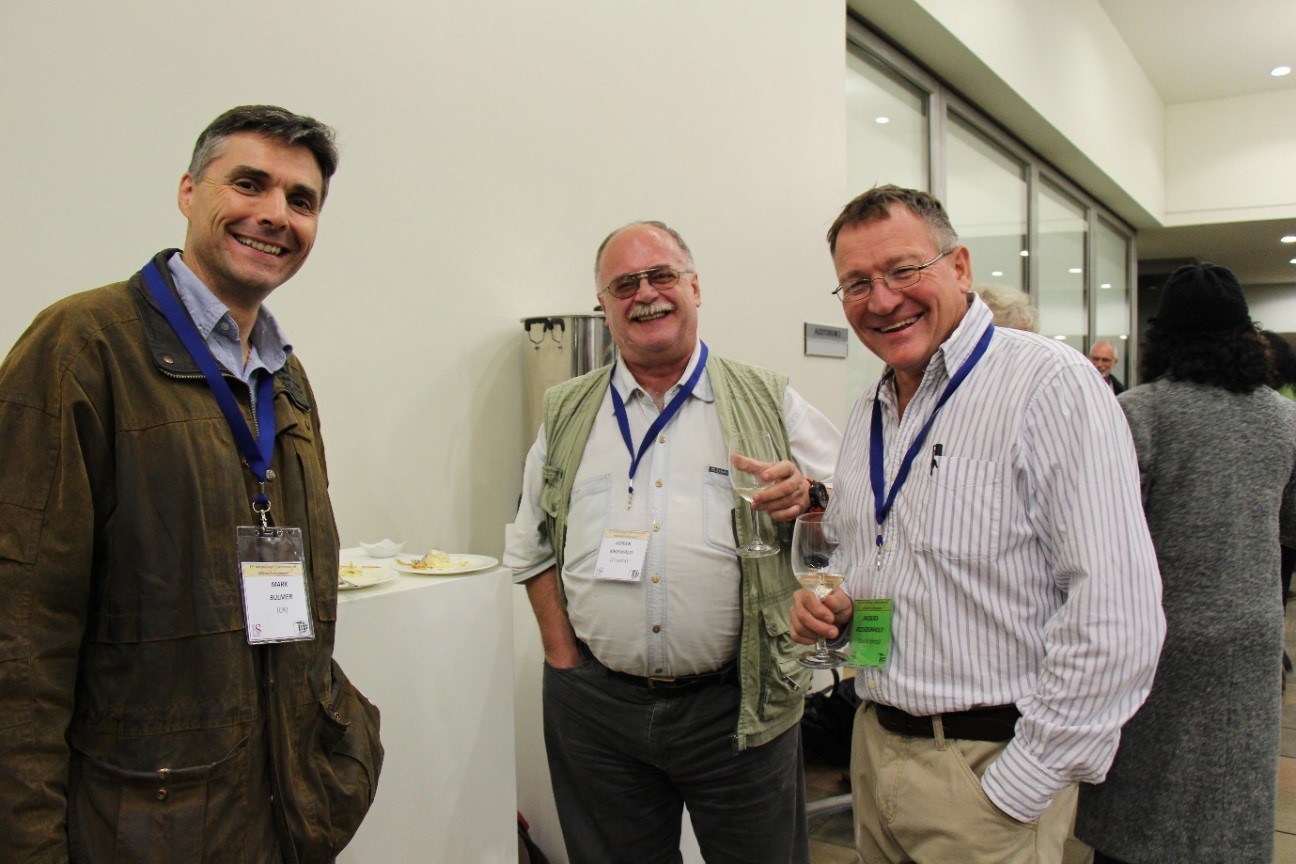 On Sunday, 18 June, the welcoming function took place at the STIAS convention centre. Here delegates had the opportunity to relax, meet old acquaintances and make new ones prior to the start of the academic programme.

The conference was opened by Professor Sam Tshehla, Dean of the Faculty of Military Science of Stellenbosch University, housed at the South African Military Academy in Saldanha.  This was followed by a captivating overview of the history of the IAMG by Dr Edward P.F. (Ted) Rose, President of the IAMG.  The keynote address was delivered by Professor Mike Meadows, Secretary-General and Treasurer of the International Geographical Union, and Past President of both the Society of South African Geographers and the Southern African Society for Quaternary Research. The Master of Ceremonies for the Conference was Captain (SAN) Mark Blaine.

After the opening session the first two sessions on Military Environmental Management and the influence of climate and terrain on military operations in Africa followed. These two sessions was chaired by Eric McDonald and Hermann Häusler, respectively.  A Poster session concluded the academic program of the first day.

The Monday evening saw delegates heading off to Koelenhof wine farm, on the outskirts of Stellenbosch. A wine tasting and meal of soup and “roosterkoek”, a South African bread “braaied” or barbecued over coals from a wood fire was enjoyed by all. After some more wine the group returned to their hotels – some more reluctantly than others! 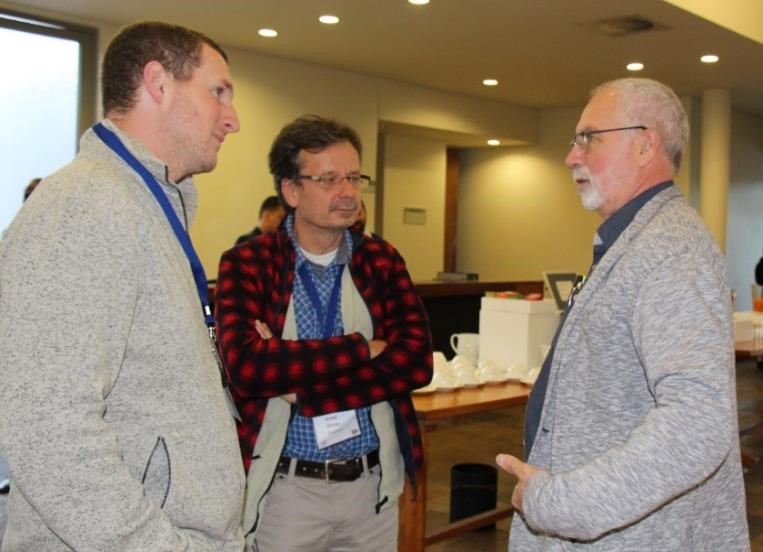 The rest of the evening was spent exploring the eating establishments of Stellenbosch. It may be noted that some delegates may even have partaken in some of the wines on offer at these establishments, but since that could not be ascertained beyond reasonable doubt, we will not include that as a fact.

Wednesday morning saw the delegates heading out on a field trip.  After a visit to the charming Penguin colony at Boulders – and the impressive granite boulders – we visited Cape Point. After crossing the mountains several times the next stop was the Castle of Good Hope, the oldest colonial building in South Africa. The day ended in the restaurants of the Cape Town Waterfront. 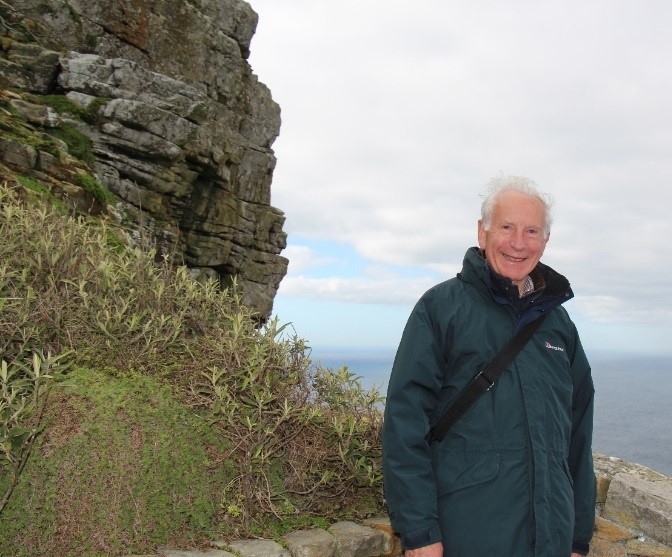 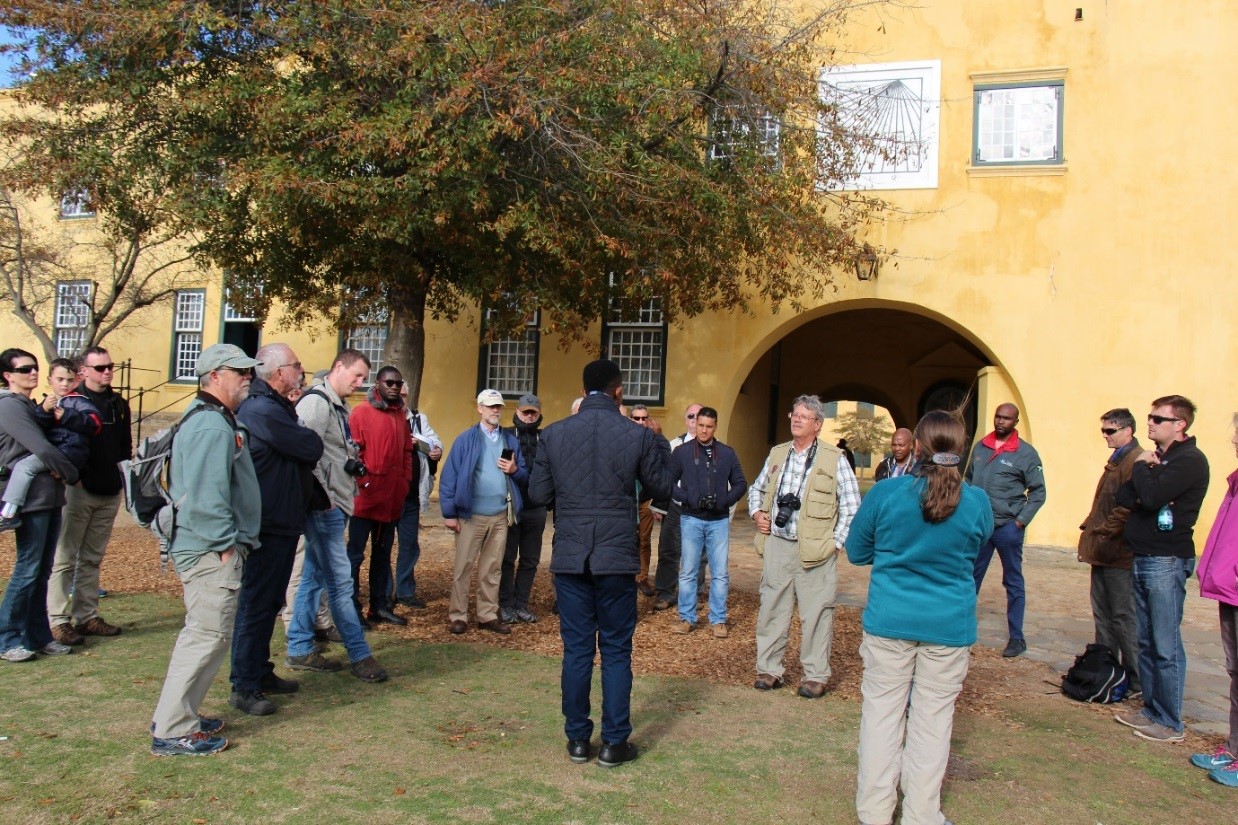 The delegates at the Castle of Good Hope in Cape Town.

Thursday started with an open session chaired by Steven Henderson, followed by a session on Military Archaeology and Heritage with Jean Martin in the role of chairperson. After lunch delegates had the afternoon free and then the conference dinner (once again in STIAS) ended the second last day. 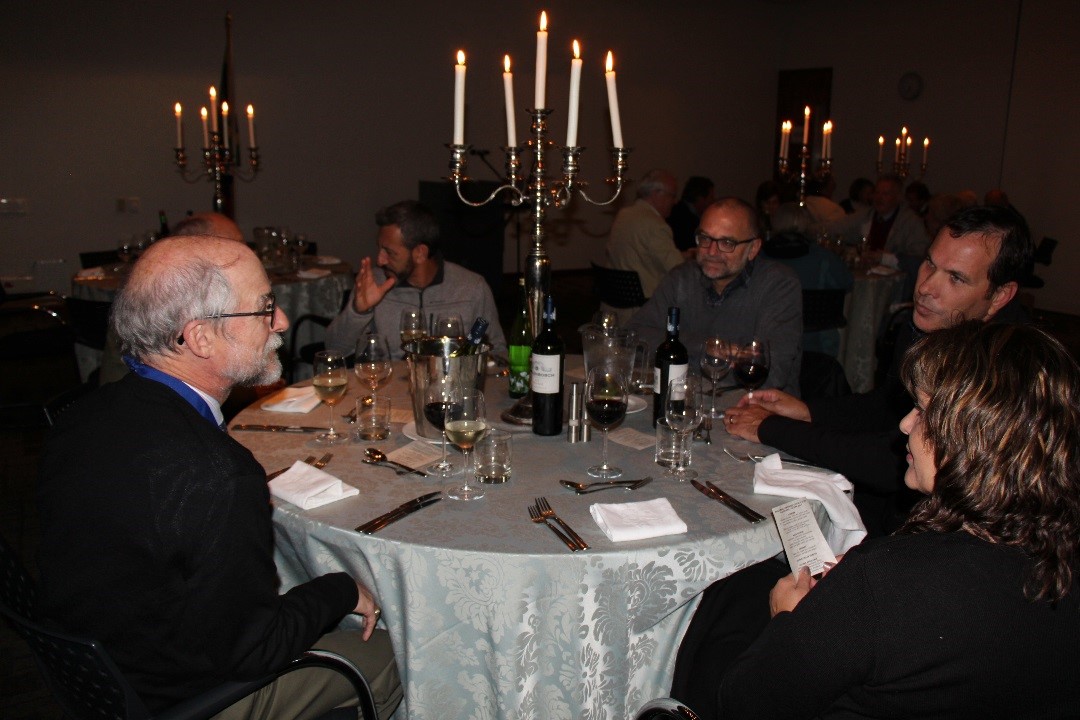 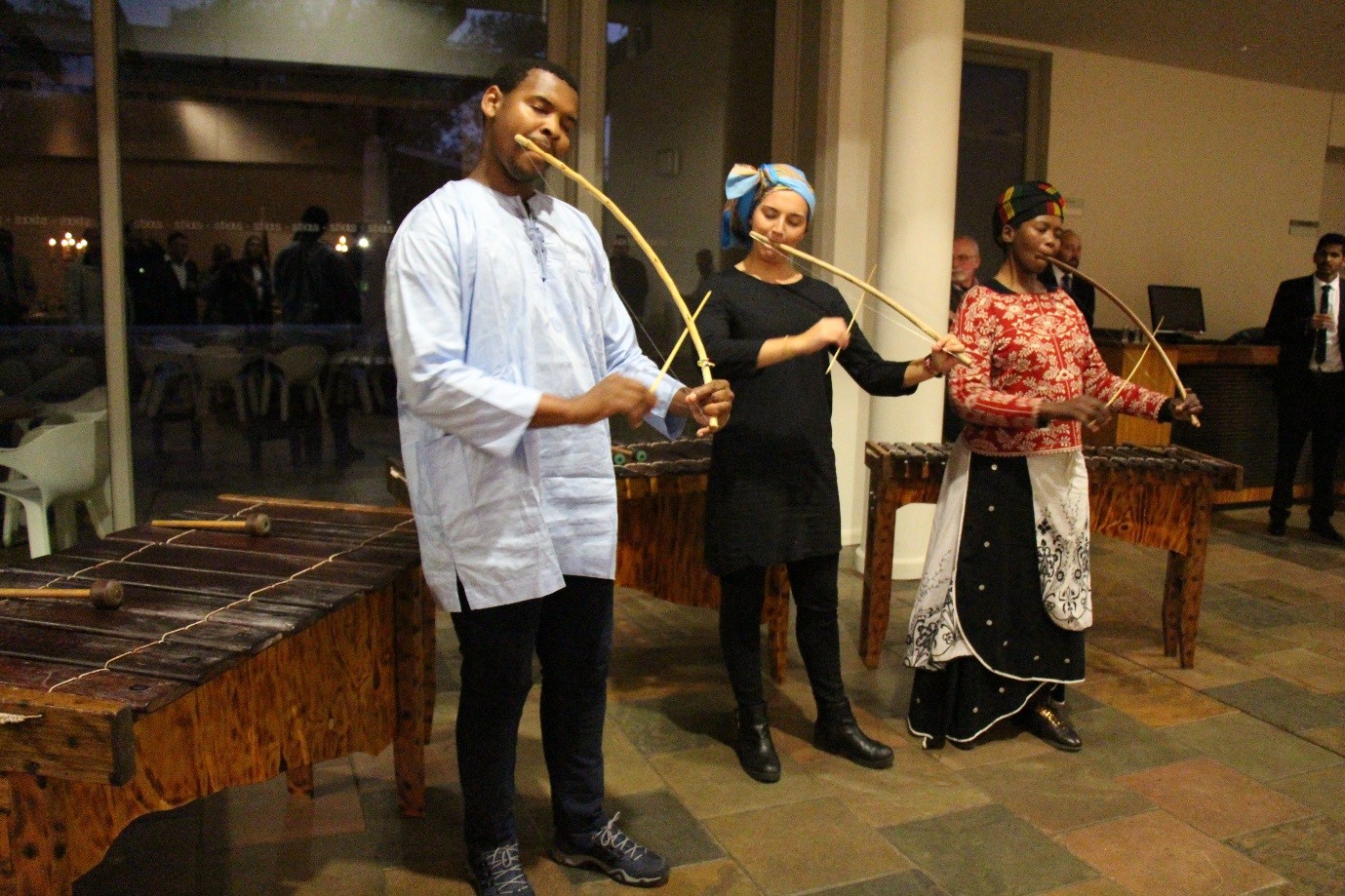 The Marimba Band in action at the conference dinner.

Two sessions formed the Friday programme. A session on Military Mapping (chaired by Aldino Bondesan), and an Open and Student Panel, chaired by Peter Guth. This last panel gave students the opportunity to present their research to a high-ranking audience. This was followed by a closing lunch and the departure of most of the delegates.

A group of 18 people attended the post conference Battlefield tour. This group flew from Cape Town International Airport to King Shaka International in Durban on Saturday morning. The group visited the battlefields of Blood River, Isandlwana, Rorke’s Drift and Spioenkop, as well as the place where Winston Churchill was captured during the Anglo-Boer War and the Chieveley military cemetery.  On this tour the delegates could engage with the practical reality of the academic presentations at the conference. 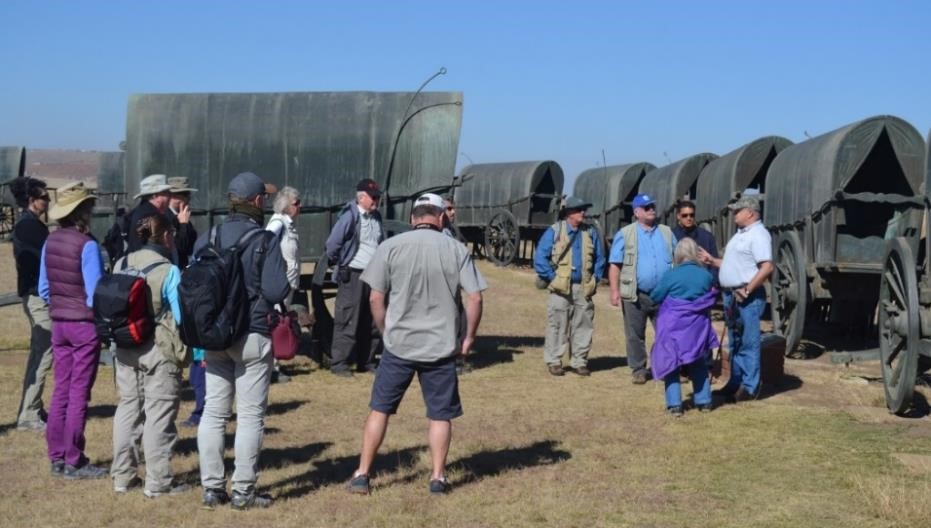 The tour members at the site of the Battle of Blood River. 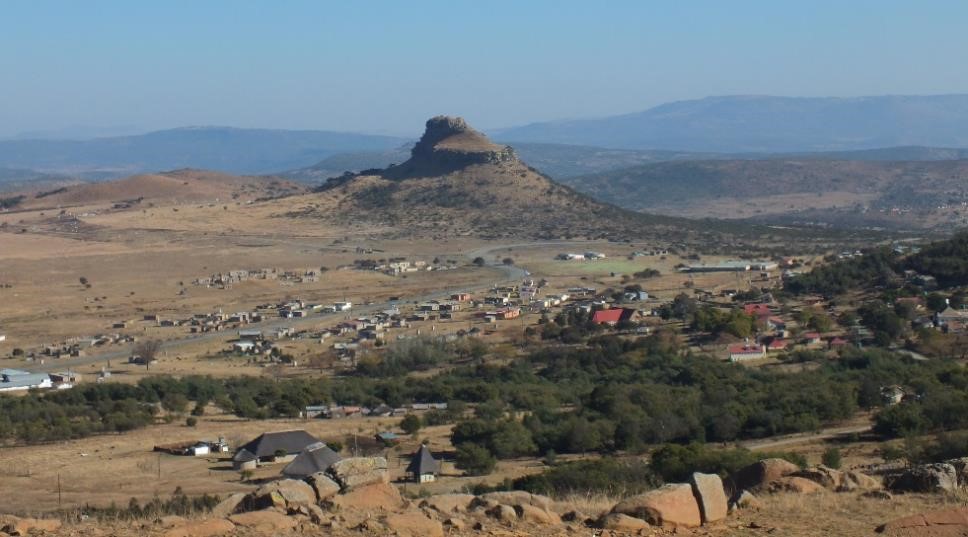 The battlefield of Isandlwana. 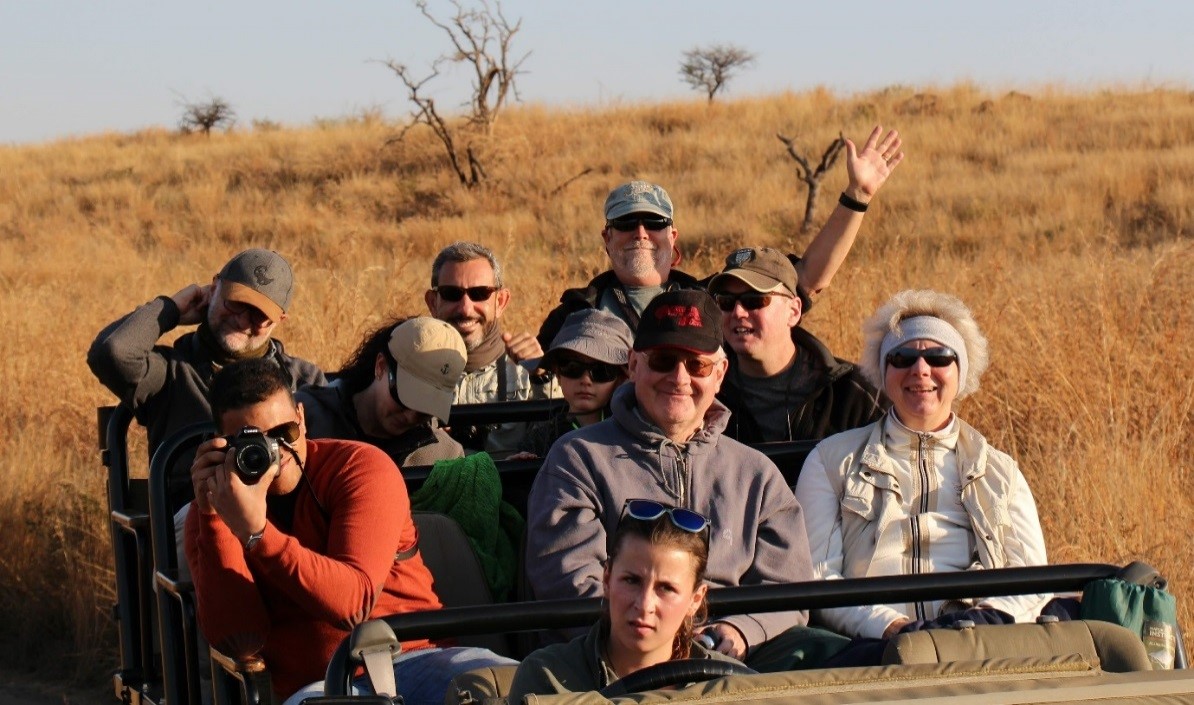 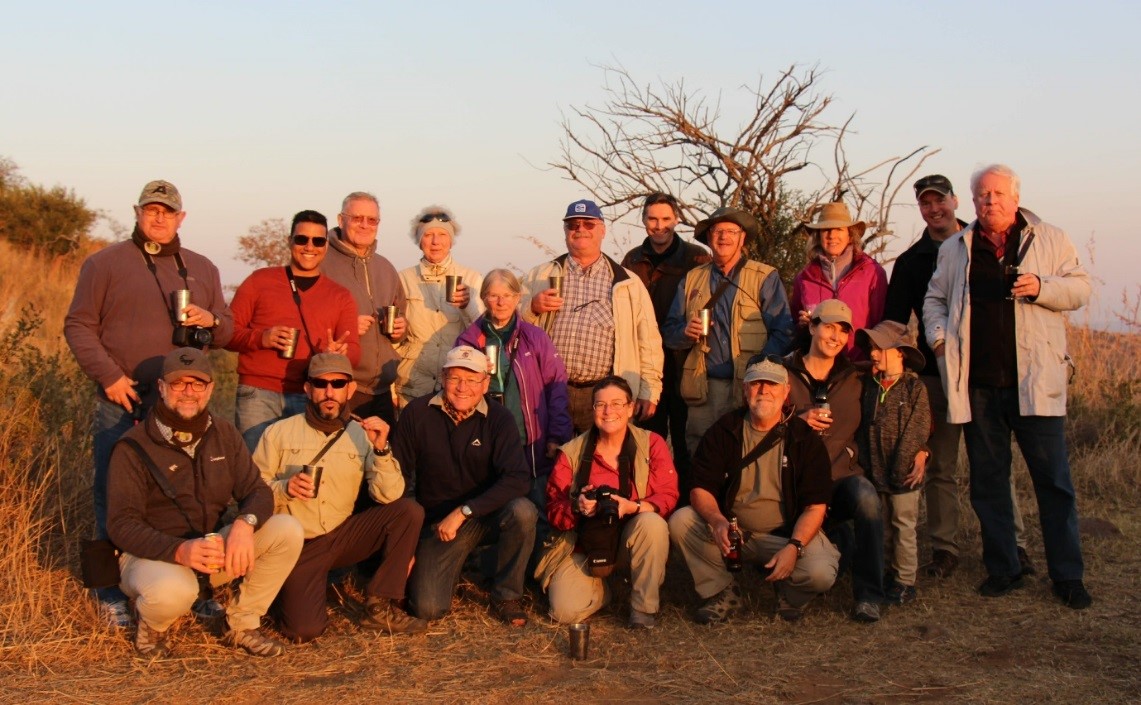 Sundowners in the veld at Nambiti Game Farm.