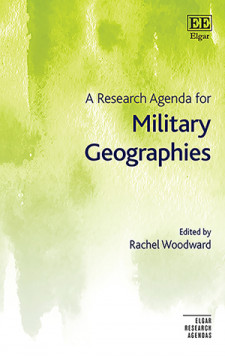 A Research Agenda for Military Geographies has now been published.  The book is an edited collection of thirteen chapters (plus a short introduction by me) which all deal, in some way or another, with the ways in which military phenomena and military activities are expressed and constituted geographically.  The intention behind the collection is to give readers new to the field a sense of the range of ways in which we can think about military geographies, and that intended readership is diverse, from undergraduates who may be starting to think through this basic ideas, to more established scholars within geography and beyond, who want to get a sense of the range of issues at play when we talk about military geographies.  If you’re interested in reading it, ask your library to stock a copy.

Editing a book is not without its difficulties, but this was a really straightforward collection to bring together.  I had been approached about the possibility of editing this book a few years ago by Edward Elgar Publishing (who, incidentally, I would highly recommend to any author or editor – the team there are both efficient and utterly supportive), but for various reasons didn’t get started on the book until early 2018.  The brief I gave to prospective authors was broad – to write about the military/geography connection in whatever way they saw fit.  Some authors chose to write a synthesis of current research and thinking with respect to a specific issue, and others chose to position detailed empirical analysis within a broader conceptual context.  Either way, I’m delighted with the chapters, because taken together they provide a really clear indication of the diverse ways in which we can think geographically about military activities and military phenomena.  It’s important, I think, that not all of the authors identify what they do in research terms as ‘military geography’, and nor do all of the authors self-identify as geographers.  This makes the point, implicitly at least, that when thinking about the geographical constitution and expression of military activities, we’re dealing with a very wide range of issues which require consideration from diverse viewpoints.

I’m also really pleased to have contributions in the book from scholars at a range of career stages, from early career scholars (including a couple who were still completing their PhDs at time of writing) through to established figures in the field.  We have contributions from around the world, too, as a means of trying to escape from the Anglocentricity of much writing in the field (though inevitably perhaps given my own positioning and knowledge, the UK and US experiences figure centrally).  Some of the contributors were well known to me as writers in this field (even if I’d never met them in person).  With others I took a gamble on the basis of only knowing very little about their research, and invited a contribution with the hope that they would have something interesting to say.  They did.  I don’t want to make rash claims that the book brings together absolutely all possible perspectives on the geography/military relationship – there are gaps, of course.  But I’m confident that collectively the chapters set out a fairly full range ideas about what military geographies might constitute and where we might focus our attention in the future.

I won’t list the chapters here, but if you go to the Edward Elgar Publishing webpage for the book, here [link to https://www.e-elgar.com/shop/eep/preview/book/isbn/9781786438874/ ] you’ll be able to click on the ‘look inside’ button to see the table of contents and read the introductory chapter which contains brief chapter summaries.  In brief, there are chapters on the emergence of traditional military geography, on genocide and militarism, on nuclear warfare, on aerial perspectives, on the securitization of arid spaces, on the intersections between law, war and geography, on military geoeconomics, on everyday military geographies, on soldier deployments and spirituality, on military masculinities, on military theatre, on environmental politics, and on post-military spaces.   I really really enjoyed working on this book, and my thanks have to go to the 17 contributors who together made this book possible.