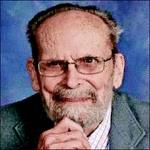 Ric Terman passed away on March 22, 2018 at his home in Bailey’s Crossroads, Virginia, at the age of 94. He was born on January 25, 1924 in Beijing, China, the son of educational missionaries. He returned to the US as a young teenager, completing his high school years in Ohio, Pennsylvania, and New York, graduating from the Bronxville NY High School. During that time, he was very active in the Boy Scouts, becoming an Eagle Scout and joining his father as he led Scouts on “Westward Ho” adventure travel trips to the west coast.

Ric entered Columbia College in 1940, where he studied geology. His studies were interrupted by his service in the Pacific theater during WWII where he spent three years as a photo interpreter for the U.S. Army Air Corps. He saw action in New Guinea, the Philippines, Okinawa, and South Korea. Ric was awarded a Bronze Star for his actions on the beach at Wakde Island in June 1944.

Upon returning to Columbia University, Ric completed his Bachelors in Geology in 1946,followed by a Masters in 1948, and his PhD coursework in 1949. He then joined the instructional staff in the Geology Department at the University of Kentucky and served on the staff at the Kentucky Geological Survey, working on engineering geology and karst hydrology.

In 1951, Ric joined the U.S. Geological Survey as a Geologist, where he worked for 40 years in the area of military geology in Europe, then later focusing on the geology and tectonics of eastern Asia and the Pacific rim. In 1973, he served as the principal compiler of the Tectonic Map of China and Mongolia. During his final 12 years at the Survey, he served as Chief, Asia and Pacific Geology, in the Office of International Geology. He was proud of his efforts to help the fledgeling geological programs of the nations of the Pacific rim to become better stewards of their natural resources.

After retiring in 1991, he served another 20 years as Scientist Emeritus at the Survey, where he was Director of the Circum-Pacific Geospatial Data Project, a project connecting 10 Asian nations and six U.S. companies to build a digital database to share the region’s geospatial data. Outside of the Survey, he pursued his passion for local history, actively participating in the Falls Church and Northern Virginia Historical Commissions. He had a particular focus on documenting and preserving the 40 boundary stones of the District of Columbia, combining his interest in rocks and history in a single project!

On the home front, Ric met his future wife Gertrude Cook during his time at Columbia and they were married in 1947. They had two sons, Christopher and Mark, who they raised in Falls Church, VA, except for a 5-year assignment for the Survey in Heidelberg, Germany. Trudy died in 2002, and in 2003 Ric married Sigrid Reddy Watson, who shared Ric’s heritage as a child of China missionaries. For the past eight years, Ric and Sigrid have been living in Goodwin House, a retirement community in Bailey’s Crossroads, Virginia.

Ric is survived by his wife Sigrid, his son Christopher and wife Debbie, his son Mark and wife Susan, and his four grandchildren, Gail, Noam, Stacey, and Mikhail. Donations in his memory can be made to Ric Terman’s EAGER Grant Program at the Geological Society of America Foundation (https://gsafweb.org/ ).